Migrating from an Avaya phone system to 3CX

You are here:
Uncategorized 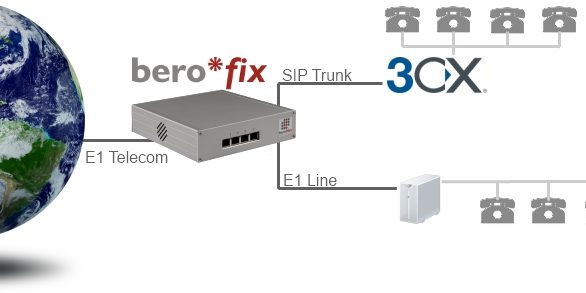 When the support contract on their Avaya phone system expired, the company needed a new open standard solution with which they could be vendor independent, thereby lowering their costs substantially and achieving maximum flexibility. With over 500 employees making more than 2.000 outgoing calls a day across, the PBX is the lifeline of their business and going back to traditional PBX vendors such as Avaya, Siemens or Alcatel was not an option considering the CAPEX (initial costs + renewals) and OPEX (running costs) of such a system.

The challenge was to find a robust solution to cope with such a high demand.

Following extensive research, Zehnder chose the 3CX Phone System in concert with beroNet’s VoIP gateways (beroFix). This PBX and Gateway combined cost was very convincing as the overall combined system was extremly effective, easy to learn and quick to implement.

3CX could reduce the OPEX drastically – through reduced administration and the flexibility to choose SIP standard IP phones. By building on a Windows-based IP PBX they could integrate it with their existing IT infrastructure and achieve the flexibility that was required.

The beroNet Gateways (beroFix) where chosen due to their modular design, high 3CX compatibility and driver free technology with built in echo cancellers and Fax support.

“By placing the beroFix in front of our proprietary PBX we were able to initiate a soft migration to our new 3CX PBX for Windows. beroFix proved itself as a robust, carrier grade system from day one, handling up to 5000 calls per day (internal, incoming and outgoing) while the unbeatable price of the the berofos Failover solution was the closing argument. I was particular pleased we were able to continue using our familiar Windows FAX system simply by implementing the beroNet CAPI solution. ”
– Mr. Ercan Yapalak, Zehnder IT Department

In January 2010 Zehnder started to setup a test infrastructure. Zehnder decided to run both the new 3CX Phone System and their proprietary Avaya phone system in parallel. This way they assured that the proprietary system could act as a backup while allowing a soft migration to the new system.

30 Zehnder users from Sales, Field Sales and Production where connected to test the new 3CX Phone system while the rest of the company still used the old system. Interconnection between the 3CX, the proprietary system and the external PSTN E1 trunks was done via a beroNet Gateway 6400 3 E1. This way none of the users noticed something has changed while testing the 3CX Phone System.

Due to telephony being a mission critical part of the Zehnder business, beroNet implemented a full redundancy system constituting of 2 beroNet Gateways 6400 3 E1  and a beroNet fos Failover Switch. This system assures peace of mind with minimal downtime and allows for maintenance to be done on the running system without disturbing or disrupting the operations

Since the first day of the test, the beroFix devices have been carrying the full load of traffic in the Zehnder organization. All calls are routed through the beroFix 6400 before they are either distributed to the old Avaya Phone System, or the new 3CX System.

All internal calls from the proprietary system to 3CX and back are also routed through the beroFix Gateway.  On any given day, as much as 5.000 calls run through the beroNet Access Gateway devices.

Zehnder’s existing soft-fax solution was enhanced with a beroNet’s CAPI Interface (beroCAPI) to connect their Fax solution to the berofix E1 Gateways. This way Zehnder employees were able to directly send faxes from their desktops PC, precisely the way they use to.

Despite some initial teething troubles largely caused by the old Avaya PBX, the professionalism with which 3CX and beroNet helped Zehnder implement the new PBX solution convinced Mr. Yapalak.

“Large infrastructure projects often have teething problems. At that point it is very important to see how fast a vendor can respond. 3CX and beroNet answered all our questions fast and with professional competence – I am very satisfied with their support.” – Ercan Yapalak, Zehnder IT Department.

Popular Topics
Explore
Get in touch!
Please submit all support queries to support.beronet.com If you need immediate support, please review our on-demand support. Thank you!